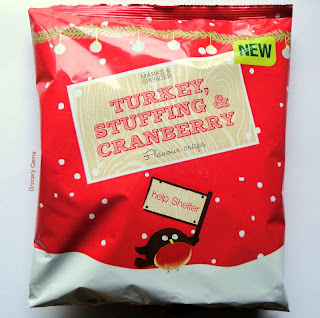 Don't these look cute? I love the bright red snowy packaging and little robin on the front, it's very festive. My expectations are always quite high with Marks & Spencer and I had no doubt that these Turkey, Stuffing & Cranberry crisps would be an improvement on the other Christmas crisps I tried recently (from Tesco). 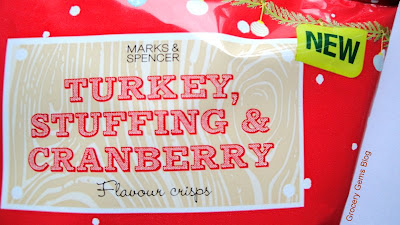 Straight out of the packet I could see that these M&S crisps looked fantastic; there were no over baked or limp looking crisps here. The colour is invitingly golden, with a visibly abundant sprinkling of seasoning. 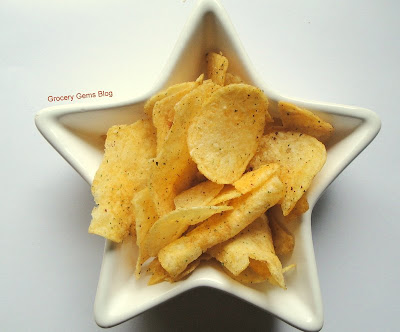 The initial flavour was very good, they had a rich meaty taste. The stuffing flavour was delicious too, there was lots of herb flavour coming through and quite a lot of onion too. In fact I would say the onion flavour was particularly dominant in these crisps and left a lingering aftertaste. 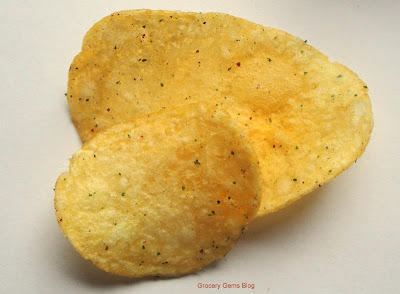 Unfortunately there wasn't any cranberry flavour that I could detect, which is only a problem because M&S include the words "& Cranberry" in the product's name. I can't even say that there was an underlying sweetness to the flavour as the crisps are predominantly salty and meaty. However, as a simple roast turkey and stuffing flavour they were delicious.