Nestle have released four new Kit Kat Chunky flavours which again ask the public to vote for their favourite. It's time to "Choose A(nother) Chunky Champion". As a self confessed coconut addict imagine how excited I got when my brother found this Kit Kat Chunky Coconut. Are you imagining? Now multiply that image by twenty and that's probably close to how excited I was. Think: five year old child on Christmas morning. 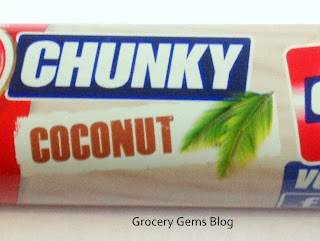 I'm not sure why the wrapper doesn't have a picture of a coconut on it, maybe that was just too obvious. 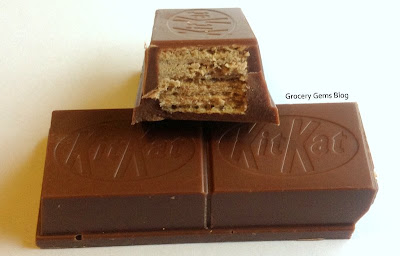 The chocolate is thick and creamy with a lovely sweet coconut flavour to it. It's quite subtle but is still strong enough to satisfy coconut lovers. I can't help but be a little disappointed that the inner wafer doesn't have any coconut flavour. It's the same wafer layers as a regular Kit Kat Chunky. I would have preferred a layer of coconut cream inbetween the wafers. Despite this, the coconut flavour in the chocolate does hold it's own quite well against the more dominant wafer layers. 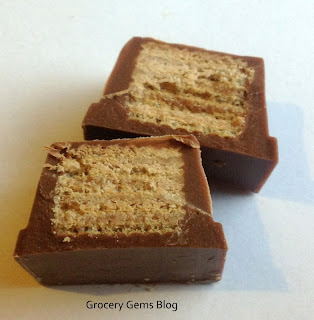 Since I'm a coconut fiend I would have liked more coconut in this Kit Kat Chunky, but the subtle flavour has understandably been pitched for the more mainstream market. I still applaud Kit Kat Chunky for choosing coconut as one of their new flavours. There aren't enough coconut chocolates available (especially since weirdly enough I don't like Bounty's at all!). In a market with virtually no competition, this has become my favourite coconut chocolate bar!

Also released are the new Kit Kat Chunky flavours: Mint, Choc Fudge, and Hazelnut. Last time around the Peanut Butter Kit Kat Chunky was the victor. Which one do you think will win this time and which Kit Kat Chunky will you be voting for as your champion?