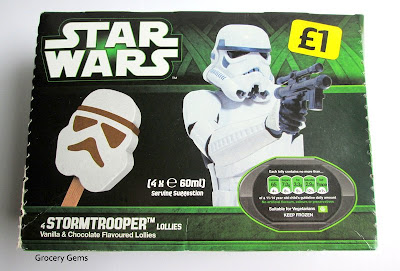 I've previously reviewed Star Wars Ice Lollies, which were shaped like lightsabers (review HERE). But who needs those when you can get your very own edible Stormtrooper instead? The image on the box depicts a floating head on a stick that actually looks pretty good, if a little short for a Stormtrooper. But if you think the real ice lolly is going to look exactly like the one on the box then these are not the ice lollies you're looking for. IT'S A TRAP. 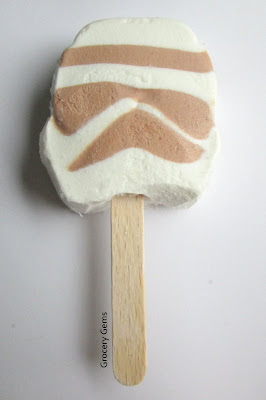 From what I can see, this Stormtrooper is wearing a headband and sporting a fetching handlebar moustache - he is from a 70's movie after all. Or perhaps he is simply a battle damaged Stormtrooper who has been through a few rounds with an angry Ewok. Either that or he's one of those elite fighter Stormtroopers who still manages to hit his head walking through doorways.

Meanwhile... back to the box. 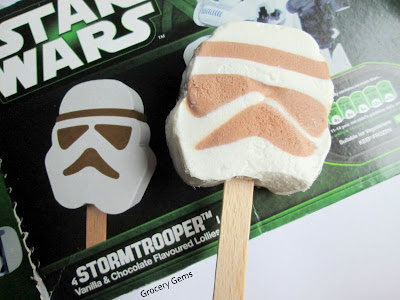 Yep, not looking quite the same as the image on the box. But still, I'm going to complain too much about a product that costs £1.00 for four ice lollies, it's obviously a budget product and one that is still fun for any Star Wars fan. 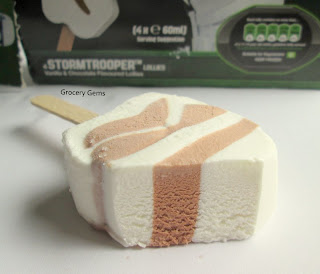 Each Stormtrooper ice lolly only contains 64 calories, less than any of the mini ice creams I've been reviewing lately. The vanilla and chocolate ice cream is very similar to what you would find in a standard supermarket tub of neopolitan ice cream - very basic but still surprisingly enjoyable.