I love coffee, my husband would attest to the fact that I'm not fully human until I've had my first coffee of the day. I especially love my Nespresso coffee machine. I've only had it a few months but it's now an essential part of my kitchen. It makes perfect espresso without any mess or fuss at all. There are sixteen main Grand Cru coffees to choose from with the occasional special edition being released during the year. In the run up to Christmas Nespresso always release a limited edition range of "Variations". This is my first Christmas as a Nespresso owner and as someone who loves coconut I was over the moon to discover that the Variations 2012 are: Coconut, Hazelnut and Macadamia Nut.

All three Variations have been blended with the Livanto Grand Cru, intensity 6, as the base coffee. The Coconut Variation does not disappoint with it's intense coconut flavour. It adds a real sweetness to the base espresso, with a rich lingering coconut flavour. I preferred the Coconut Variation as a base espresso for larger drinks such as a latte or mocha rather than on it's own.

The Hazelnut Variation has an instant wow factor, it immediately fills the vicinity with a rich hazelnut aroma. The flavour of the hazelnut is rich and powerful with intensely creamy undertones. I've always known that hazelnut goes perfectly with chocolate but this proves that it tastes great with coffee too. The Nespresso staff at their Regent Street store told me that this is the most popular of the three variations. 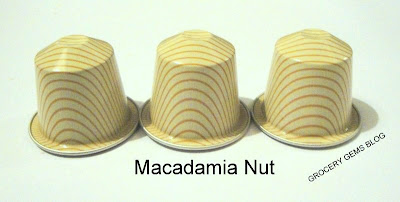 The Macadamia Nut is the most subtly flavoured of the three with a mild indistinct nutty taste. It adds a delicate flavour but doesn't overpower the overall flavour of the Livanto Grand Cru coffee. It's not as sweet as the Hazelnut Variation or as strong as the Coconut Variation. If you are not a fan of flavoured coffees then this is the variation for you.

What do you think of the new nut inspired Nespresso collection?

You may also be interested in:
Arden & Amici Almond and Chocolate Chunk Biscotti