The lovely @Banjo_Chocolate has once again sent me a fab parcel filled with some great finds. This Lina milk chocolate and peanut wafer is a Slovakian import, adding another new country to my Around the World challenge. It's made by traditional biscuit and wafer brand Sedita who have a long history in Slovakia and the Czech Republic. 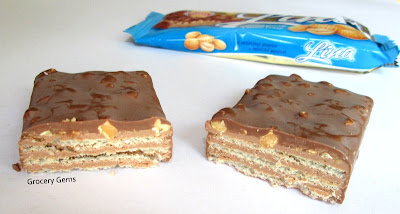 There are quite a few different varieties of these Sedita Lina wafers, such as dark chocolate & peanut, hazelnut, and this milk chocolate and peanut. It's a simple wafer bar but a very tasty one! The inner wafer has a lovely crunchy texture and is layered with a milk chocolate flavoured cream. There is a generous sprinkling of chopped peanuts on top of the first wafer layer, which gives an added crunch and nutty flavour to the sweet milk chocolate. 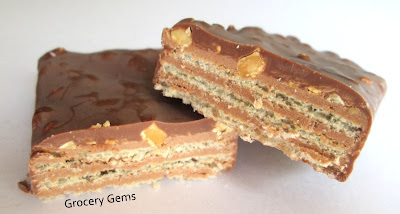 Thank you so much to @Banjo_Chocolate, for sending me this delicious wafer, and the other bars too (reviews coming soon!). Please support the campaign to get the much missed Banjo Chocolate bar back in production - further details about the campaign are on the Bring Back Banjo Chocolate Bar Facebook page.

RATING: 7 out of 10.
Buy them again?: I'd try some of their other flavours.
Purchased: Check out your local Polish or East European grocery shops.
Posted by Grocery Gems at 08:56

Email ThisBlogThis!Share to TwitterShare to FacebookShare to Pinterest
Labels: Around the World, Banjo, Chocolate, International, Wafer