The Cadbury Crispello Double Choc was released to some fanfare last year (review here), as the first new counter chocolate from Cadbury for 15 years. Even though I enjoyed the Crispello, I have never purchased it again since that initial review. I was pleased to see this new Vanilla Velvet Crispello and decided to give the Crispello bar another try. I've already reviewed an almost identical version of this, the Milka Crispello Vanilla Cream (review here), which was quite disappointing, so I was curious to see how the Cadbury one would compare.

The Cadbury Crispello Vanilla Velvet comes in the same format as the previous Crispello bars. There are three individual milk chocolate covered pieces, each with 55 calories. 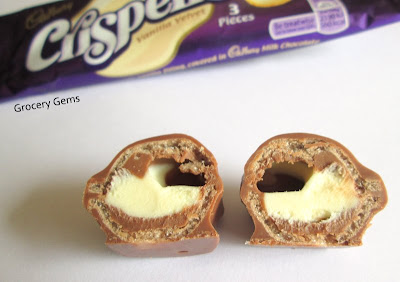 The inner filling consists of a vanilla cream surrounded by crispy wafer and covered in milk chocolate. Each chocolate is a decent size, with the deliciously familiar Cadbury chocolate scent. The wafer is light and crunchy and provides a lovely background to the vanilla centre. I was pleased to find that there was no horrible artificial vanilla flavour, as I found with the Milka Crispello. Instead, the vanilla centre has more of a creamy flavour with a subtle vanilla taste. The overall effect is not dissimilar to a Kinder Bueno, but without any of the nutty flavour of that bar.

Without a doubt this Vanilla Velvet is my favourite of the Crispello bars I have tried thus far. It might be a bit foolhardy of Cadbury to release a new chocolate in the middle of a heatwave, but I think this Crispello Vanilla Velvet will do extremely well regardless!