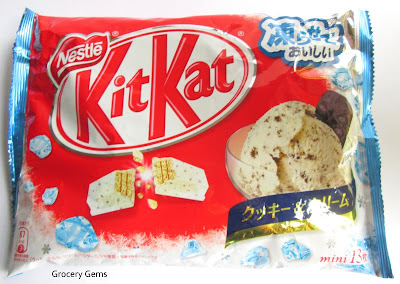 I've always been a fan of anything cookies and cream themed so I was delighted to be asked to review these Cookies & Cream Kit Kats by Oyatsu Cafe. This is the latest Limited Edition flavour Kit Kat to be released in Japan this year, hot on the heels of the Passionfruit Kit Kat and the Match Green Tea Kit Kat, which I've previously reviewed. 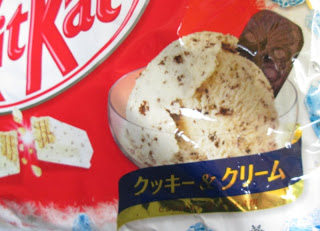 The Cookies & Cream Kit Kat, come in multipack bags containing 13 mini Kit Kats. Looking closely at the packaging, with it's ice crystals decorations and overall wintery appearance, I realised that this is not just an ordinary cookies and cream theme - this an ice cream version! 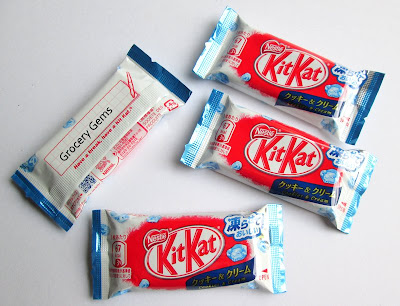 Just like the previous mini Japanese Kit Kat I've reviewed, these are gorgeously packaged and I love the space to write your name on the back of each one. 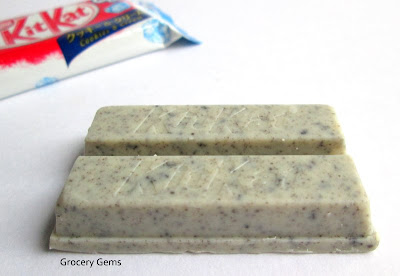 As soon as I opened the wrapper I loved way the appearance of the chocolate - it's mottled creamy colour with dark biscuit bits is just what I would expect from a cookies & cream flavour. 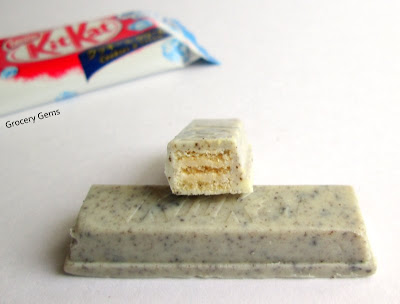 This is by far my favourite of all the Japanese Kit Kats I've tried. The outer chocolate is creamy with an intense vanilla flavour that is perfect for the ice cream theme. The cookies add a lovely biscuity flavour and a slight texture to the chocolate too. The inner wafer is slightly different to the usual Kit Kat, with extra vanilla flavour within all the layers, adding even more sweetness. The whole thing is absolutely delicious and tastes like the Haagen Daz ice cream flavour Cookies & Cream in chocolate form!

I just want to mention the Cookies & Cream Kit Kat already available in the UK. I've had a review sitting in my draft folder for a long while now, but it's never as much fun to write reviews for products that have been disappointing, and the UK version was very much a let down. Here's a quick comparision between the UK and Japanese Cookies & Cream Kit Kat's.

Immediately the outer packaging is completely boring and lack any of the charm of the Japanese version. It's also got that garish 5 + 3 FREE logo that is typical for UK multipack. It's also a bit misleading since these multipacks never come in packs of 5 anyway, it's always 7 or 8 in a pack.

As you can see the Japanese Kit Kat's are mini versions so obviously they are quite a bit smaller. However, what they lack in size they make up for in flavour. The UK version is simply a cookie flavoured white chocolate on top, with a milk chocolate layer underneath. The flavour is fairly standard - very sweet, and nothing special about it at all to justitfy it as a Cookies & Cream flavour. It certainly can't compete with the superb flavour of the Japanese Cookies & Cream Kit Kat.