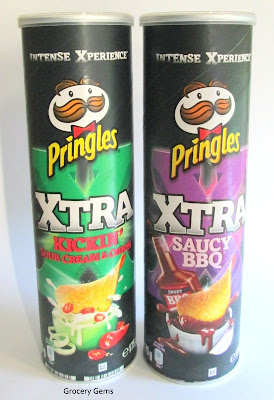 I very rarely buy Pringles, in fact the last tube I bought was the Roast Chicken flavour which I reviewed here. These Pringles Xtra were released a few months ago but I spotted them for the first time recently in Morrisions. They're described as being packed with even more "aggressive flavours that won't quit". 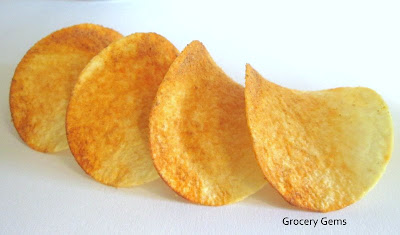 The Pringles Xtra Saucy BBQ are liberally covered with heavy seasoning on both sides. The flavour is meaty with lots of tomato, onion and garlic coming through that builds in intensity. They haven't reinvented the BBQ flavour of these, they are quite similar to the standard Pringles BBQ, but just with LOTS more seasoning. The result is quite sweet but with a peppery kick at the same time.

The Pringles Xtra Kickin Sour Cream & Onion are also full on flavour and seasoning. This flavour seems to work in the opposite way to the above Saucy BBQ in that the flavour instantly kicks in with a surprisingly strong chilli heat, rather than building up, and this then subsides in intensity to reveal the more familiar sour cream and onion flavour.

I have to admit I didn't like either of these Pringles flavours, they were both a bit too much for me. But the good news for Pringles is that the boys in the Grocery Gems household all disagreed with me (and I'm outnumbered!). They loved the strong flavours and extra seasoning! Pringles have apparently targeted this Xtra range at the "younger male market" and if my family is anything to go by they are on the right track.