Red Nose Day is coming up next month and for the first time Comic Relief has teamed up with confectionery makers, PEZ to create three limited edition sweet dispensers. They are all based on the theme of this years red noses - dinosaurs. My boys are going to love that so much!  Not just any dinosaurs either, meet the three ‘pre-hysteric’ Red Nose Day characters, who go by the names of Dinomite, Triceytops and T-Spex!

Teaming up with PEZ is a brilliant idea and I'm sure these new and limited edition dispensers are going to be very popular. PEZ has a long history going back to 1927, when it was founded, and gets it's unusual name from the German word for peppermint - pfefferminz. There have been hundreds of PEZ designs over the years and they are avidly collected by "PEZhead" enthusiasts. I had a little PEZ collection myself as a child (mainly Disney characters) and have bought some for my children too - they love collecting all the different fun dispensers!

I was delighted to be sent one of the new PEZ dispensers to preview.  With his three white horns, he looks like he must be the "Triceytops", and he's absolutely adorable. I'll definitely be buying the other two in the range alongside the usual purchases of red noses and wristbands. 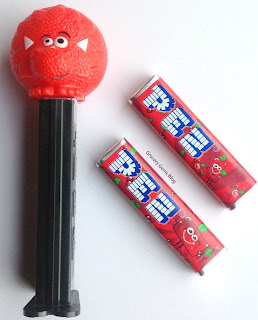 PEZ sweets come in a variety of flavours and the ones with this Red Nose Day dispenser were all cherry flavour. If you've never tried a PEZ sweet before (where have you been?), they are a fairly simple, crunchy, and chalky type of sweet. These cherry flavoured ones were sweet and fruity and we all enjoyed them. Kids will love putting the sweets into the PEZ tube and seeing them dispensed from underneath the dinosaur! 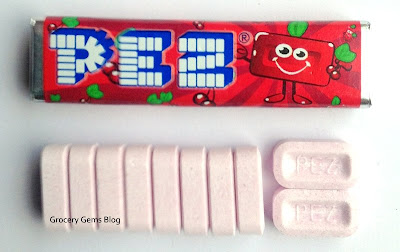 Red Nose Day is celebrating it's 25th anniversary this year and during that time has raised over £600million for disadvantaged children in the UK and Africa. These limited edition dispensers will be stocked in Sainsbury’s, TopShop, B&M Bargains and many other retailers nationwide in the run up to Red Nose Day on Friday 15th March. A donation of 5p from every PEZ Red Nose Day dispenser sold will be donated to Comic Relief.

I wanted to end this with a PEZ inspired joke, but the only one I could find is a joke from Family Guy that even Seth MacFarlane says he "regrets". Not that one then. I'll leave you with a few extremely tame triceratops themed jokes instead:

What does a Triceratops sit on?
It's Tricera-bottom!

What do you get if you cross a Triceratops with a Kangaroo?
A Tricera-hops.

Feel free to leave your dinosaur or candy inspired jokes in the comments below but keep 'em clean people!