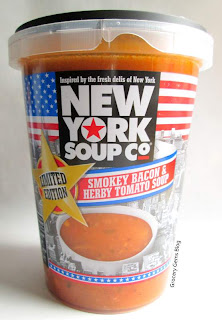 My Hubby bought this Limited Edition New York Soup Co Smokey Bacon & Herby Tomato soup at the weekend. I think it was the word "bacon" that lured him in rather than the "limited edition" part! We've been eating a lot of soup recently, especially for dinner. It's usually of the home made variety but it's useful to have a ready made soup in the fridge for busy days. 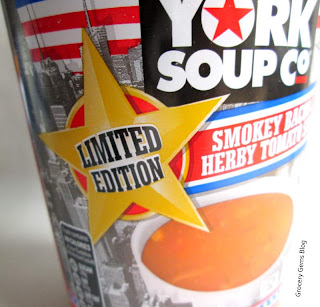 I love the Limited Edition star and the whole American style of the packaging. This Limited Edition soup is a combination of vegetables, bacon and spices and looked slightly more watery than I was expecting once opened. There were lots of "bits" in the soup but they were mostly very small pieces, with not enough larger chunks. 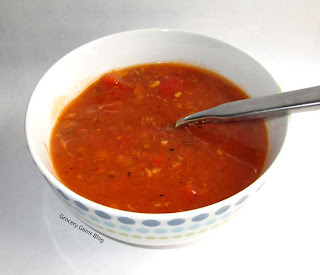 The tomato flavour was good, and there was plenty of seasoning and herbs. The bacon part was slightly more disappointing. Even though there was a nice smokey flavour to the soup, there were too many little stringy strands of meat rather than chunks of bacon. However, it was still a very satisfying soup and I always prefer tomato based soups to creamy ones. I like the New York Soup Co range but this limited edition soup probably won't be added to my list of favourites from their range.