My husband picked up this imported chocolate bar from CyberCandy, knowing that I love most coconut flavoured bars (apart from Bounty, but more about that later!). I've never actually had a regular 3 Musketeers let alone a flavoured version so I was intrigued to give it a try.

The 3 Musketeers Coconut comes in two separate pieces, a feature that always appeals to me. I don't always want to finish a chocolate bar in one go and this is perfect for that! As soon as I unwrapped the chocolate the sweet coconut smell was full of promise. The wrapper describes it as a "chocolate coconut flavoured centre" but I would have assumed the coconut was also in the outer chocolate as the scrumptious coconut smell was so prevalent. 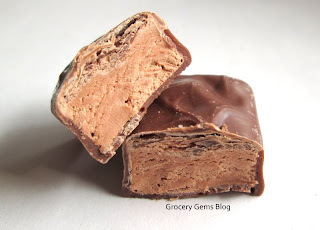 I wasn't sure what the "chocolate coconut flavoured centre" would be like but I suspected it might be a Bounty type filling. I was very happy to discover that in fact this bar has a whipped centre. The texture and taste of the filling is just like a Milky Way, which is not too surprising seeing as both bars are made by Mars, but with the added benefit of a sweet coconut flavour. What you have here is essentially a coconut Milky Way - and I thought it was just delicious. The coconut flavour is just as strong as the tempting scent suggested and it combines perfectly with the fluffy nougat. 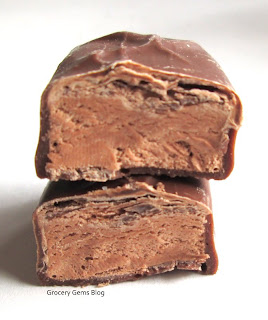 Tthe filling is of course extremely sweet, but because of the it's whipped nature, it's also a very "light" experience at the same time. The outer chocolate is quite bland, which means the whole bar is dominated by the inner filling. A bit more balance from the chocolate would have improved the overall flavour but, even without that, it was a very enjoyable bar, and one that I can imagine buying again. Yes, it's a very simple confection but it's one that I found very appealing. Another bonus is that there are only 180 calories for the whole bar, that's just 90 calories in each segment. It's also advertised as having 40% less fat that standard chocolate bars.

A quick note on the whole "Bounty" thing. How can I love coconut but dislike Bounty bars? It's mainly because of the gritty texture of the centre. I like coconut as a flavour in chocolate and cakes but that doesn't mean I want to eat a sugary mass of coconut on it's own (I'm ignoring the thin chocolate covering). I'm only mentioning that because my husband also bought me another coconut bar called Mounds.

Again I wasn't sure what to expect but even though I like the packaging, and especially the coconut instead of an O, I was again suspicious that this would be too similar to a Bounty. 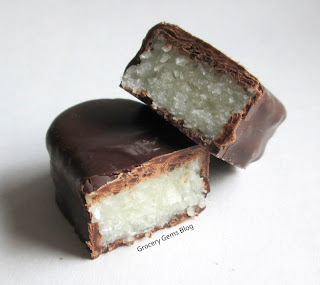 Unfortunately for me it's basically an American version of a Bounty bar, so not something I could enjoy. However I thought it was worth a quick mention here and if you're a fan of sugary coconut then it's definitely worth a try!