New from Pringles is this Roast Chicken & Herbs flavour, which I believe is exclusive to the UK. Apparently roast chicken is the sixth most popular flavour of crisps here in the UK, and it seems that Pringles would like to claim their share. Pringles are technically not even potato crisps, they are officially called a "savoury snack", which is because they actually contain less than 50% potato. It's not a brand that I buy very often, but I was tempted by the Roast Turkey variety. Since I never managed to track those down, I was pleased to find this similar (ish) flavour. 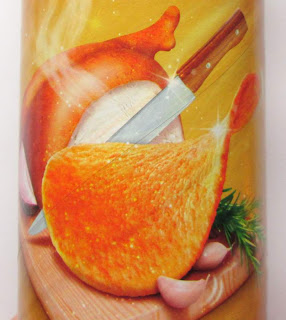 Mmmm - carved straight from this strange looking chicken. It's worth noting that a lot of meat flavoured crisps (certainly in the UK) are more often than not completely vegetarian, i.e. they don't contain any meat at all. It's not the case here as "chicken fat" is listed as an ingredient in these potato crisps savoury snacks. It doesn't sound very appetising does it, but unsurprisingly, as soon as I popped the lid, I could smell a strong chicken aroma alongside the usual herby scent associated with roast chicken crisps. 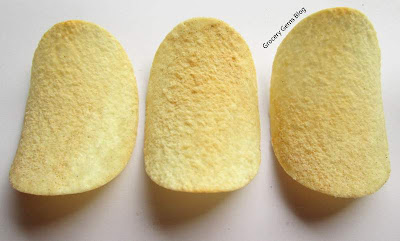 The salty edge means I didn't find these as moreish as other flavours of Pringles. However they are still wickedly tasty, and if the sixth most popular flavour of crisps is your favourite, then you should give these Pringles a try.