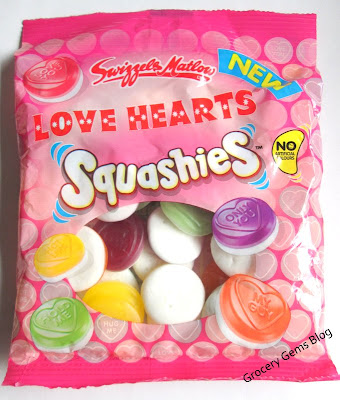 These Squashies by Swizzels Matlow are all based on their classic hard or chewy sweets, turning them into softer jelly sweets. There are three varieties; Love Hearts, Drumsticks and Refreshers. The packets all look bright and eye catching, and obviously aimed at fans of Haribo type sweets. 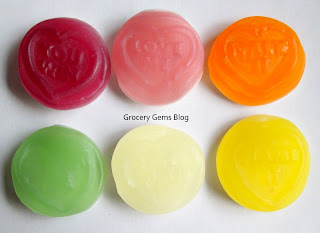 The Love Hearts Squashies are larger in size than a standard Love Heart sweet. Despite that the messages on each sweet are much harder to read and indeed, on some sweets, the message was virtually indeciperable. It's obviously a lot harder to mould a message onto a jelly sweet! It's still a nice idea and great to have an alternative to the original Love Hearts sweets, especially if you are not a fan of sherbet chalky sweets. The sweets are all fruity on one side and have a marshmallow type backing. The flavours are all fairly fruity but mainly just very sugary. Some of them also had an odd aftertaste that I didn't like at all. For that reason I would personally choose a bag of Haribo Heart Throbs over these. 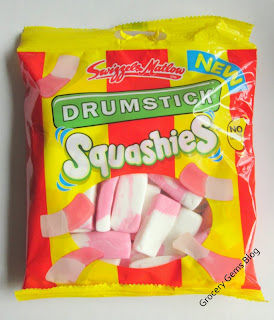 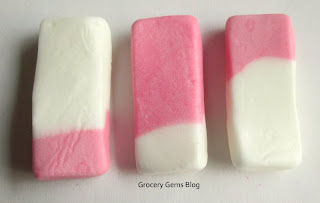 The fronts of the sweets are very neat with bands of white and pink. The backs have a more swirled effect, which I liked the look of too! 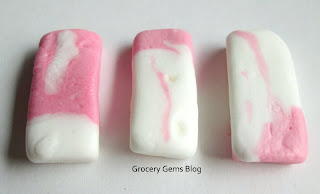 The flavour is mainly strawberry and apple but for some reason I can taste a slightly coconut flavour in them. They don't list coconut as an ingredients (it's just "flavourings" anyway) but my taste buds certainly picked it up. I much preferred the flavour and texture of these Drumstick Squashies, and they are definitely the squashiest of the bunch! 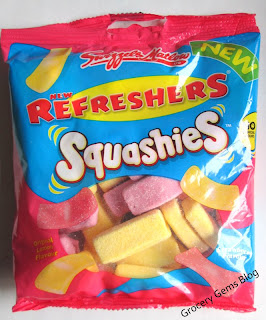 The last of the Squashies is this Refreshers version. The original Refresher sweets are a fruity flavoured chalky fizzy sweet. They often come in a tube of yellow and pink sweets, a characteristic which is echoed in this Squashies version. 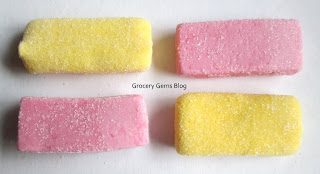 The Refreshers Squashies are described as strawberry and lemon flavour. They have a sugary sherbet covering which is not sour and just adds a slightly crunchy texture. The strawberry ones were my favourite - the flavour reminded me of strawberry ice cream. The lemon ones were quite disappointing as there is no real lemon flavour to them, they just tasted bland and sugary. The flavours have obviously been pitched more at kids but I think these could have done with some extra flavour.

Overall it's a very cute selection of sweets and I like the idea behind it, but it's slightly let down by the flavours.