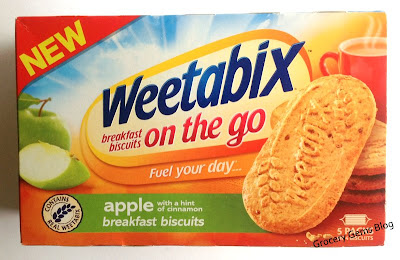 Yes it's ANOTHER new breakfast biscuit! I probably wouldn't even have realised these were new, as the the box looks so similar to other brands of breakfast biscuit out there, but for the "apple with a hint of cinnamon" flavour which seemed different at least. Apple and cinnamon is one of my favourite flavour combinations, so I had to give these Weetabix On The Go a try. They are even made with real Weetabix, although they obviously won't be as good for you as just eating a bowl of actual Weetabix! 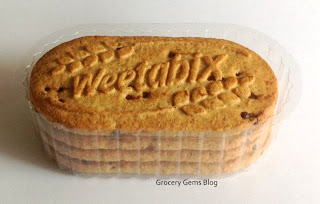 Inside the box there are five individual packs, each containing four biscuits. Each portion of four biscuits comes in a little plastic tray. It's definitely a great idea for anyone who wants to carry a pack around with them. I don't reach for breakfast biscuits, like Belvita, if I need a snack to take in my handbag, as they usually resemble a small bag of crumbs after being carried in my bag for any length of time. These Weetabix On The Go are protected by their plastic container so are much better for if you are actually... on the go. 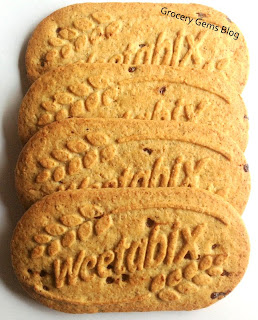 The biscuits are all a decent size and four seems a very generous portion. Having looked at the nutritional information it would seem that two biscuits is more in keeping with a portion size. All four biscuits would be 220 calories, which is the same as some chocolate bars. 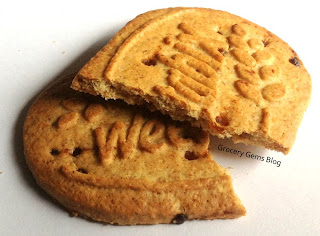 The biscuits have a very good wheaty flavour and a great texture, very similar to a digestive biscuit. In this way I preferred them to other breakfast biscuits which can be quite hard in texture. They have a lovely apple flavour from the apple pieces within the biscuit. The cinnamon flavour is quite strong and a bit overpowering at first but it did seem to mellow as I ate more of the biscuit. I love the simple combination of apple and cinnamon, and luckily it works just as well in a biscuit as it does in a cake!

There are two other varieties in this range; Milk & Cereals and Fruit & Fibre.

Grocery Gems: Weetabix On The Go: Apple with a hint of Cinnamon