I found this intriguing chocolate in a local shop, alongside some other Milka bars I have never seen before. And when I write "intriguing" I obviously mean downright strange. I experienced some doubt when faced with the choice of buying it. I haven't had much luck with some of the Polish or Bulgarian Milka bars so on part of me was telling me not to get it, but the other part of me looked at the packaging and thought "Sold!". It just looks so cheery and "happy". 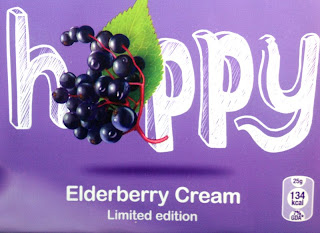 Your eyes do not deceive you, this really is a Milka bar called Happy Elderberry Cream. It's also a Limited Edition, which in this case, is probably for the best. A internet quick search informed me that this bar was originally released in Poland. 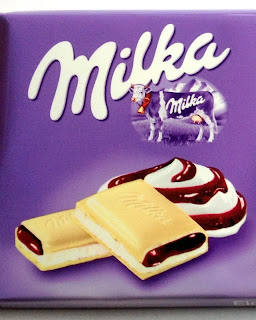 From looking at the packaging this bar consists of white chocolate filled with separately defined layers of white cream and an elderberry. 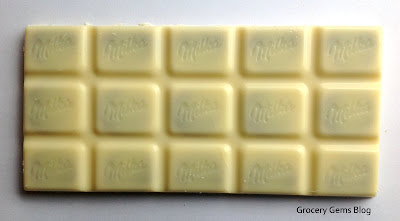 As soon as I opened the packaging I thought it looked quite strange. I couldn't capture it too well in my photo but the dark filling is clearly visible underneath each segment of white chocolate. I think this is the first time I have seen a bar like this. 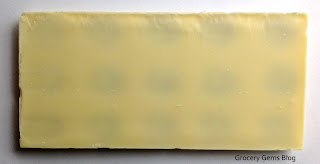 The filling is clearly visible from the underneath too. I have to admit the question "why did you buy this?" was ringing even louder in my ears at this point. And there is another question too. What on earth does Elderberry even taste like? I mean sure, I've had those apple & elderberry juice drinks before, I'm even lucky enough to have a lovely elderberry tree in my own garden (I've raked up these little berries enough times), but I still don't know what they taste like. 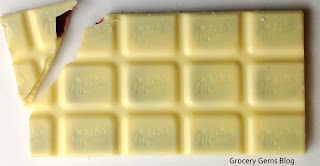 Annoyingly the filling proved quite hard to photograph. I couldn't take my usual cross section type photo, it just wasn't playing ball with that one. I can tell you right now that there was no white layer inside, as per the picture on the front. There is only a hard white chocolate outer shell that is filled with jam. Yes really jam. 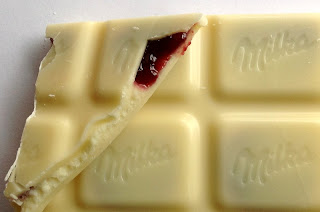 Definitely no white layer anywhere, just white chocolate and a jam like substance. It's impossible to break this chocolate along it's designated lines, the jammy layer makes it quite soft once it's snapped. The elderberry filling is a dark red colour, it's not completely smooth, there are definitely some bits of the berry inside (although it's not lumpy either). Just like a jam really! The elderberry flavour is quite unique, it reminded me of blueberry, but whereas blueberry can be very sweet, this has an added tartness to it. 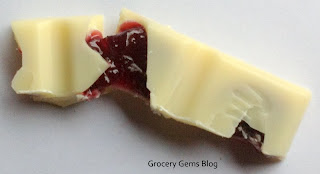 The white chocolate is smooth and creamy, very inoffensive stuff. It's similar to a Milky Bar white chocolate, not really a chocolate in the true sense of the word, but tasty nonetheless. Because it's quite a simple chocolate, it actually goes with the tartness of the inner jam quite well. I never thought I would write this as when I bought the bar I was expecting to absolutely hate it, but I actually enjoyed the overall flavour. I feel guilty even writing that, as I suspect most people would hate it, but yes, I admit it, I thought it was nice. It could be because I haven't had any chocolate all week or maybe because I do like a bit of jam! Having said all that I only ate a few pieces, and that was more than enough, as the flavour does get a bit "throat burny" quite quickly, not surprising given the white chocolate and jam combination! To add a bit of balance to my enthusiastic opinion, my husband did not like this bar at all and just said "no" after one bite.

There was also a Plum Cream version available, made of milk chocolate. That one was called GOOD with two plums for the double O. I didn't buy it but if anyone wants me to review it I'm happy to give it a go!