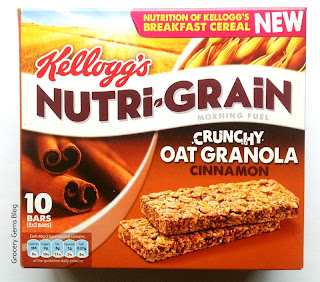 When I think of Kellogg's Nutri-Grain cereal bars I think of the Soft Fruit breakfast bakes, Elevenses range or the relatively new Breakfast Biscuits. Now there is another addition to the range, these Nutri-Grain Crunchy Oat Granola. They are available in three flavours; Honey, Chocolate Chip or Cinnamon.

I went straight for the Cinnamon variety. My husband loves cinnamon but he hates raisins, which tends to rule out most cinnamon based cereal bars. They nearly always have some kind of dried up fruit in them. I bought a box which contains five packs, each with 2 bars. Although I would say they are less of a bar and more of a hard biscuit. 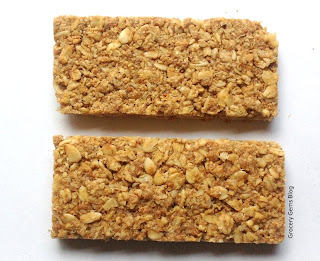 Remind you of anything? I would say these bars look more than a little similar to the Nature Valley range of Granola bars. The overall taste is delicious. They have a lovely oaty flavour, which is very satisfying. The texture is crunchy but also quite crumbly, and dissolves easily to a lovely buttery melt. These are perfect for a tea or coffee break - a hot drink really helps break them down! 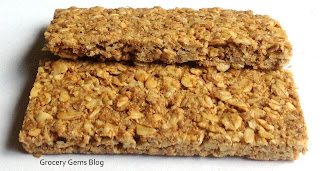 Best of all, the cinnamon flavour is strong and sweet; it's not overpowering and perfectly compliments the oaty flavours of the base. A great snack for any cinnamon fan (and anyone who loves the Nature Valley granola bars!).