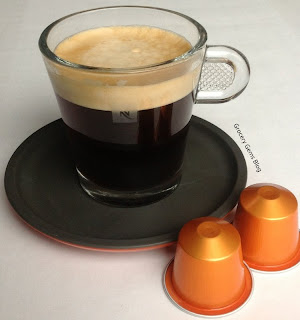 Nespresso owners will be pleased to know that the brand new Linizio Lungo has been launched as part of the permanent range of Grand Cru coffee. As a complete Nespresso devotee I couldn't wait to give this new Lungo a try. Nespresso describes the coffee as a rich and velvety with caramelised smoothness and notes of cereal and malt. It has an intensity of 4, which is quite mild, and has been created especially for the morning coffee drinker. The name "Linizio" derives from the word "inizio", symbolising the start of the day. It's made of pure Arabica beans from South America, using a blend of Brazilian and Colombian coffee.

Linizio Lungo joins the existing varieties of Nespresso Lungos: Vivalto Lungo, Decaffeinato Lungo and Fortissio Lungo. These are all created to provide a larger cup of coffee. Nespresso state that the Linizio Lungo works especially well with milk as "combining this exceptional Grand Cru with milk reveals even rounder, caramelised notes while preserving its roasted character".

The capsules are bright orange - apparently the colour was chosen to reflect the morning inspiration for this coffee, evoking a sunrise. It's certainly a cheery colour to start your day! 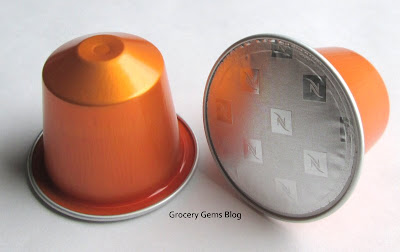 The timing of this release is quite apt for me, as I've been getting into Lungos as my morning coffee. I usually go for the more intense Fortissio Lungo as I prefer strong coffee. For the past few days I've been drinking the new Linizio Lungo (with milk added) and have been surprised by just how rich and full bodied the flavour is for a 4 intensity. The flavour has an almost malty edge to it which I just love. There is definitely some caramelised sweetness too but also a very strong, almost bitter, note to end. Usually I find anything less than intensity 5 as being too weak but this one is full of flavour and intensity. I'm very glad that this isn't just a limited edition as I absolutely adore this Linizio Lungo. 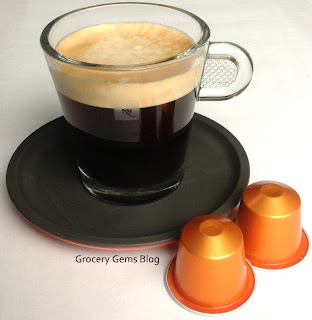 I understand there will be plenty of Nespresso news in the upcoming year as they are planning to extend the permanent range of Grand Crus. One of these might even be a permanent 12 intensity blend (fingers crossed!). I know there are many Nespresso fans who want a stronger intensity - as soon as I have any news I will let you all know!