What we have here is undoubtedly the best ice lolly in the world - of ALL time. This is not an exaggeration, it's a fact. This is a banana shaped ice cream that not only looks like a banana it also peels like a banana. 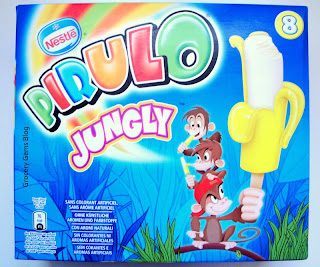 When I first saw this ice cream (in Portugal) I didn't realise it was actually peelable. I thought the picture on the packaging was just a cute image to reinforce the banana flavour. Since I love banana ice cream anyway I was sold on the picture alone. I was seriously astonished when I discovered that it was really a peelable ice cream and that it actually worked! Every time I tried one of these lollies it always peeled like a dream. The peel never tore or fell apart. There was something so satisfying about peeling the layers down. Just sheer perfection.

The Nestlé Jungly doesn't just look great it tastes good too. The outer peelable layer has a curious jelly like consistency. The only way I can describe it is as an icy gelatinous and thick substance but much nicer than how that sounds! It's unlike any ice lolly I've ever tried before. 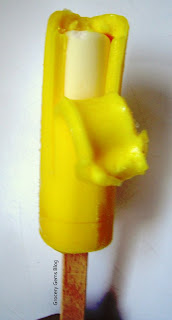 The peel is also where all the banana flavour is, very sweet and delicious. It's not a true to life fruit flavour, more of a candy fruit flavour. The inner ice lolly is just like a mini milk ice lolly. It has the same creamy flavour. The jellyness of the outer layer and the creaminess of the inner layer compliment each other perfectly. The two textures are very different and it adds to the innovative and exciting nature of the Jungly. My kids went bananas over this ice lolly (boom boom) and I think most adults would too. 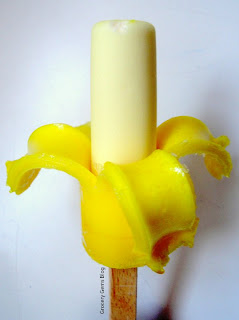 If I did ratings, then the Nestlé Jungly would be a 10 out of 10, 5 out of 5, an A*, 100% - you get the idea. The only downside? They are only available in continental Europe and some parts of Asia, so come on Nestlé bring these to the UK. Pretty please?

UPDATE: Wow almost two years after this original post Nestlé have released these ice lollies in the US as "Peel-a-Pops" under the Wonka brand. Take a look here.
Posted by Grocery Gems at 11:27

Email ThisBlogThis!Share to TwitterShare to FacebookShare to Pinterest
Labels: Around the World, Banana, Ice Lollies, International