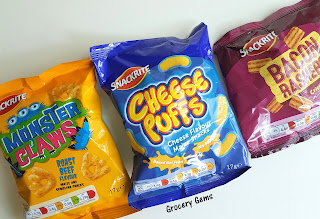 I've been hearing a lot of good things about Aldi and their great value prices. I tried some of their Jaffa cake biscuits at a friends house and was won over by their great taste. I took a trip to Aldi and came home laden with fresh fruit, vegetables, ham, chorizo, American marshmallows, frozen goods and much more for the bargain price of under £20. One of the snacks I picked up was this 18 pack of Snackrite crisps in kid friendly varieties of Cheese Grids, Bacon Rashers and Monster Claws for only £1.49. These are half the price of the branded or other supermarket varieties seeing as a 6 pack of crisps usually costs about £1. Now we all know which crisps these are 'copying' but how do they compare in taste?

I don't buy Walker's Frazzles anymore, even though my kids love them as they contain MSG and lactose. It's shocking to me that Walkers often have 'No MSG' written on their adult crisps, such as Sensations, but continue to use it in the popular children's varieties. Luckily supermarket own brands such as these from Aldi do not have any of these nasty ingredients. Indeed these Bacon Rashers are suitable for vegetarians and vegans! The Bacon flavouring is delicious and just as strong as in the branded crisps. There are only 86 calories in each 18g bag, so you might find yourself having more than one pack at a time!

The Monster Claws have the strongest taste of the three, if you like your Pickled Onion crisps super vinegary and full of flavour then you will love these. They have the same shape that you would expect for this type of crisp.

The only negative point is that there were not many 'claws' in a pack, although each claw is quite big in size. Again they are only 87 calories per bag and the ingredients are suitable for vegetarians and vegans.

The Cheese Grids have a fun shape and an even nicer taste than the usual cheesy puff type crisps. The cheesy flavour is not too overpowering or stinky. These are full of flavour and extremely moreish. There are 89 calories in a pack and they do contain milk and cheese powder.

I am usually a bit reluctant to buy such large multipacks of crisps as that can mean some packs go to waste (we don't eat crisps every day and the kids get bored if they have the same flavour too often), but that certainly wouldn't happen with this pack. In fact they seem to be disappearing at an alarmingly fast rate!


Note: I updated the first photo of this review to reflect the latest version of this crisps which contain Cheese Puffs rather than Cheese Grids.