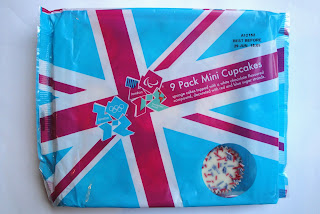 I couldn't resist picking up this pack of official London 2012 Mini Cupcakes yesterday in Tesco for £1. Leaving aside the question of whether a sporting event should be promoting cupcakes, these tell me on the back of the packet that I am supporting the London 2012 Olympics and Paralypics simply by purchasing them.

As I live in London and have primary school aged children, we are all quite excited about the 2012 games. My children especially have really embraced this whole event, never more so than this week which is Olympics week at their school (formally known as Sports Week!). They also love the Olympic Mascots, Wenlock and Mandeville, and I was really pleased to see that these characters are featured on the paper cases of these cupcakes. 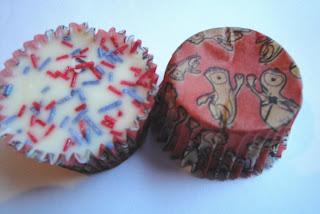 The cupcakes themselves are 'sponge cakes topped with a white chocolate flavoured compound'. Spot the odd word in that sentence. Have you ever heard of a cake topping being described as a 'compound'. Shouldn't it be called icing or fondant? Looking at the ingredients this 'compound' is made of Sugar, Palm Oil, Whey Powder, Wheat Flour, Emulsifier and flavouring. Mmmmm tasty.... no real chocolate there then. 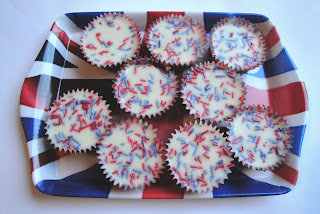 The cakes do look very cute with their red and blue sprinkles. They are little bite size cakes with 69 calories each. I have to admit that my kids loved them and I had to stop them eating too many. They would look great at any party this summer for the Olympics but I probably won't be buying them again.

Have you seen any other official London 2012 food in the supermarkets? If so let me know!