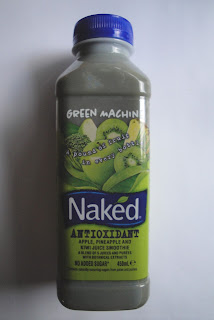 Naked have launched a new campaign called 'Grab Some Good Stuff'. I was lucky enough to get one of the free bottles they were handing out at Canary Wharf Station in London. Naked Juice began as a small fresh juice company in Santa Monica, California and is now one of the biggest and fastest selling smoothie companies in the US. They call themselves Naked Juice as they have no added sugar, preservatives, artificial colours or flavours, in their products. Their juices and smoothies are 100% real fruit, with some of their products also featuring 'boost ingredients', such as vitamins, minerals, and herbs.

I received their Green Machine which is their bestselling juice. It contains the following fruits: Apples, Kiwi, Banana, Mango and Pineapple. The label proudly states that it contains a pound of fruit in every bottle. But this is not just an ordinary fruit smoothie, it also contains a blend of ten 'botanical' extracts in varying amounts. These are: Spirulina, Chlorella, Wheat Grass, Broccoli, Spinach, Blue Green Algae, Parsley, Ginger, and Garlic.