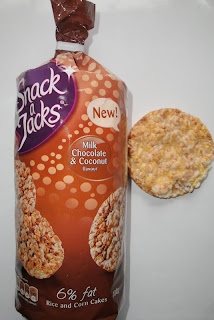 As much as I would like to snack on nothing but chocolates and crisps all day, I do realise that this is not always the best option. I've never really been a fan of rice cakes. I remember trying them out on my children a few years ago, when they were toddlers, as the 'must have' healthy snack for little people. I thought they were bland and tasteless and my children didn't think much of them either. With this negative experience behind me I hadn't bothered with the grown up range of rice cakes available. But there was something about this new Milk Chocolate & Coconut flavour that was irresistible. Maybe it was the word New! on the packaging or the fact that it has coconut in it which is just so tempting to me. 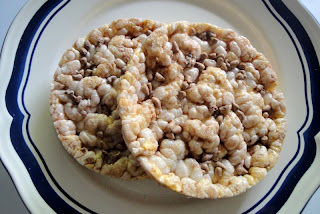 The first thing I noticed about these rice (and corn) cakes is that they are huge! These are known as Jumbo Snack a Jacks for a reason. Each cake measured 10 cm across and was almost 2cm thick! They smelled divine as soon as I opened the packet. I was still half expecting these to taste quite bland but they were absolutely scrumptious. The coconut flavour is lovely, very strong and sweet. The chocolate chips are quite pale but they really stand out to give bursts of sweet chocolaty flavour.

Best yet they only have 62 calories in each massive rice cake with 0.9g of fat. These are my new go to snack for a cup of tea which can only be a good thing. And I have also recently bought the Barbecue flavour Snack a Jacks which my kids absolutely love. Luckily for me they are not fans of coconut so I get these all to myself!