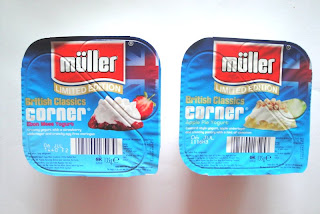 Muller have released a Limited Edition 'British Classics' range as part of their popular corner style yogurts. The packaging features a hazy Union Jack in the background obviously in celebration of the great British summer. There are three varieties of desserts in this range: Apple Pie, Eton Mess and Cherry Bakewell. These are all iconic British desserts and I was intrigued to see what they would taste like in a yogurt form. 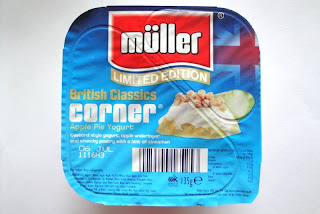 The Apple Pie yogurt features biscuit pieces in the corner, which are obviously supposed to be the 'pie' pieces. They tasted like delicious little cinnamon biscuits rather than pie crust, they are quite hard and crunchy. The yogurt is described as 'custard style' and it is lovely and thick with a nice vanilla flavour. It also has an apple puree 'underlay' which is very sweet and a bit like a jam layer. A lovely tasting yogurt, which whilst not as enjoyable as a real slice of apple pie, is still a tasty treat! 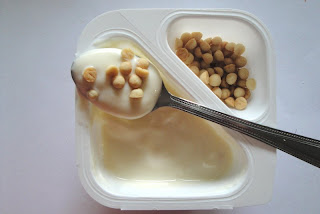 I also tried the Eton Mess variety. I'm not actually that familiar with Eton Mess as a dessert but I know it is made up of meringue, cream and strawberries. This yogurt version was quite tasty, again the yogurt was very creamy and featured a strawberry puree at the bottom. The meringue pieces were good but a bit too sweet for me to add all of them to the yogurt. 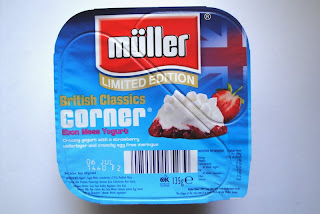 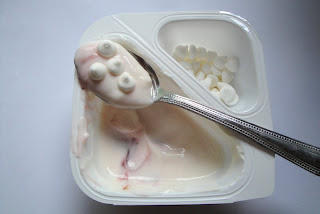 Overall, these are both very tasty yogurts and quite successfully manage to bring the taste of these iconic desserts to a yogurt format.