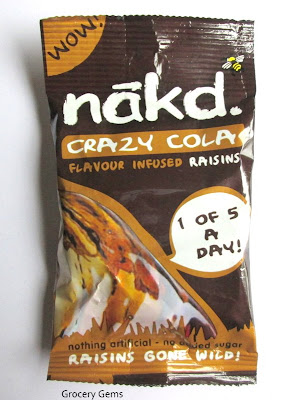 These fantastic raisins are infused with cola flavour. They taste more like cola bottle sweets than fruit but amazingly they count as one of your five a day and have completely natural ingredients. Such a fantastic treat for kids and adults alike. No added sugar, wheat, dairy or gluten makes them great for vegans and people with allergies too. There are 68 calories in the 25g bag.

As soon as I opened the bag I could smell the sweet cola smell. I thought maybe the cola taste would be quite subtle for such a health conscious product but I was surprised as the cola flavour was very strong! Just as tangy and flavourful as any cola sweet out there. The raisin flavour was actually secondary to the cola flavour. 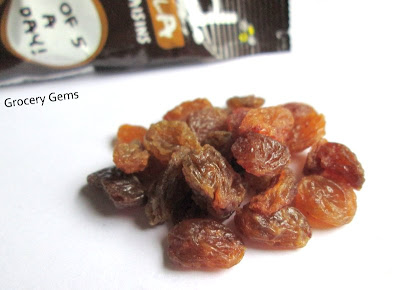 On the back of the packet it also says 'ideal for baking'. I'm going give these a try in my next batch of oat and raisin cookies to see if the cola flavour survives the baking. There are also other flavours in the range which sound great for baking as well as snacking. There is Tangy Lime, which are also like little sweeties. There are fruit flavours too: Cherry, Pineapple and Orange infused raisins.

So far I've tried the Cola, Lime and Cherry and they are all delicious. The Cola is definitely my favourite probably because it is the most like sweets! These are also a big hit with my eldest son and they are a great treat as a snack. Unfortunately my other son is completely raisin phobic so even the cool flavours are not enough to tempt him. Oh well, more for Mum!

I found these for 32p in Asda, in the dried fruits section.