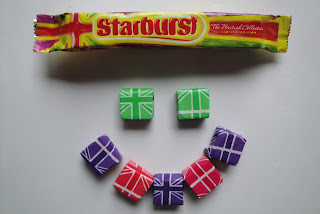 The four flavours are quite nice if a bit boring. The Apple flavour is the most interesting, it is quite tart, which makes it more like a sour sweetie. The Raspberry flavour is fruity but also quite sour. The Strawberry has a lovely sweet flavour but it would have been nice if this had been made into something slightly different, such as Strawberries & Cream. The Blackcurrant is my favourite, it's sweet and very fruity.

It seems that Starburst played it quite safe with this collection, the flavours are quite boring and the whole thing is not really special enough.