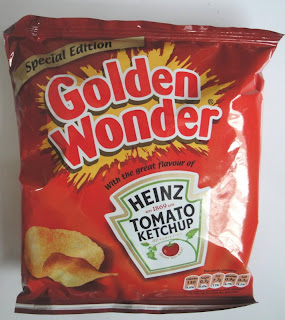 I often say that I am easily enticed by the words 'New' or 'Limited Edition' on a product, but here's one that doesn't appear very often on food... 'Special Edition'. Words usually associated with DVD releases I think!

I must admit to being very partial to ketchup flavour crisps but none of my family agree with me. Neither of my kids are interested in this flavour, even though they like actual ketchup sauce more than I do. I loved the recent Walkers Ketchup flavour but they don't seem to be available near me anymore. It doesn't matter though because hot on it's heels is this Golden Wonder Special Edition. Unlike the Walkers crisps, these are not just a generic ketchup flavour, these are HEINZ Tomato Ketchup Flavour. The whole packet looks like a crisp packet crossed with a Heinz Ketchup bottle.They even feature the iconic Heinz label on the front of the packet just in case there was any doubt.

They tasted exactly as I was expecting, wonderfully tangy but sweet at the same time. The main ingredients of traditional ketchup sauce are tomatoes, vinegar and sugar. These crisps rely on the 'Tomato Ketchup Seasoning' and 'Flavourings', to give it the saucy flavour. I'm glad to see that there is no milk or MSG lurking in the ingredients. I think overall they did a good job and I preferred them to the Walkers version which are much sweeter. These are very tasty and each crisp is packed full of flavour. 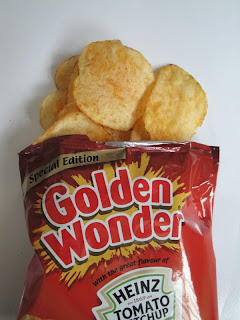 I bought these in a multipack of six for £1 in Tesco. They are also available in a Special Edition HP Sauce version. Have you tried either of these flavours?
Posted by Grocery Gems at 13:57