Cadbury's BiscBits were launched in 2011 but I had never really noticed them until a few weeks ago. They seem to be on promotion for £1 a bag in a lot of supermarkets at the moment and can be picked up in pound stores too. Mint Crunch and Rocky Road Crunch are new flavours for 2012. There are also Honeycomb Crunch, Orange Crunch and Caramel Crisp varieties available.

The BiscBits come in a bag rather than a tube like most biscuits. This makes them more like a bag of sweets and ideal for sharing whilst watching a movie or on a day trip. In reality being in a bag also means that the BiscBits will spend some time rubbing against each other and have a slightly dull and knocked about appearance. Don't let this bother you though as they are still delicious and moreish. The biscuits are shaped like little rings and have a lovely minty flavour and thick Cadbury's chocolate covering.

I also tried the Honeycomb Crunch which has been around for longer. The biscuit is very similar to the other variety but has pieces of honeycomb incorporated into the biscuit. It is basically pieces of a Crunchy bar, in a biscuit, wrapped in chocolate. What's not to like? 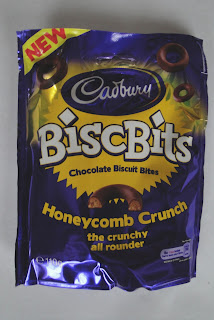