When I went to the Nespresso Store in London yesterday the new coffees were only available in this double pack costing £7.00, with one sleeve of each new variety. The design features a leather type effect on the outer sleeve and on the boxes themselves. The colours used are red, green and white, evoking the Italian flag. I love the look of the capsules with their white background stamped with the names of the coffee. It's a very different look for the Nespresso range. 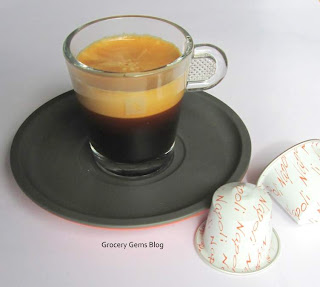 The Nespresso Napoli is described as a blend of South American, African and Asian Arabicas and best enjoyed as a Ristretto (the smallest 25ml setting). The taste is described as having smokey notes with an aromatic woodiness and slightly syrupy body. I made the coffee as suggested to enjoy the full intensity and I was surprised by just how velvety it was, especially given the intensity. However there is also a bitter note which comes through as an aftertaste. I can see why Nespresso also suggest enjoying the Napoli with sugar, no doubt to curb that slight bitterness. This would be the perfect coffee to use as the base for other drinks such as cappuccino or latte, where you still want an intense coffee flavour. 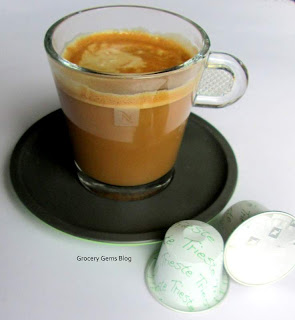 The Nespresso Trieste is a 9 intensity blend with a much silkier and subtle flavour. It is also recommended as a Ristretto (25ml). I've also made it using the slightly larger Espresso size and added some hot milk (as shown in the photo above). It's described by Nespresso as having a rounder texture with chocolate and hazelnut notes. For me there was a sweet smooth flavour to this coffee, almost like caramel, which was just delicious. Considering that the Trieste has a high intensity too, it doesn't have too bitter an edge. This was actually my favourite of the two and I can imagine I will be stocking up for the future. 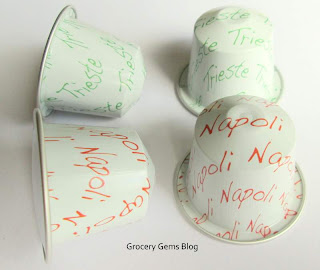 If you've tried these new Nespresso coffees then let me know what you think by leaving a comment below. Are you pleased to see these as Limited Editions or would you prefer them to be added to the permanent range?

Update 07/04/13: Having drunk both these coffees regularly since writing this review I don't think I will be stocking up on either of them, well at least not beyond the stash I already have! I'm always glad to find new products, and these certainly do have a very unique flavour, but the bitter aftertaste of both is not really for me, especially since I don't put sugar in my coffee. They're still worth a try if you want something a little bit different from Nespresso.