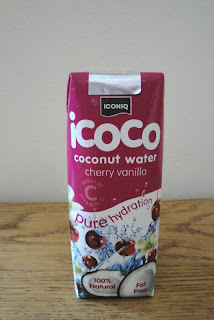 In the last few years there has been a growing health craze for coconut water which has been extolled for its various benefits. Coconut water has no fat or cholesterol and is said to be good for after exercise as it is very hydrating and full of electrolytes.  iCOCO coconut water is a new range of pure coconut water drinks that have been blended with fruit juices with no added sugars.The flavour combinations available sound delicious; cherry vanilla, pineapple or minted apple. I went for the cherry vanilla which is available in Waitrose for £1.39. It contains grape juice, cherry juice, flavourings, vanilla extract and vitamin C. Each pack contains as much potassium as a banana.

I had never tried coconut water before. I love the taste of coconut milk and coconut in general but I'm aware that coconut water tastes very different. Despite this knowledge, I was genuinely surprised by the flavour of this drink, it's not at all what I was expecting. The coconut water's flavour is unlike anything I have ever tasted before, more reminiscent of the coconut shell rather than the sweet coconut flesh. It's VERY earthy tasting (and by earthy I mean muddy!) and to be honest it just tastes odd. The cherry flavour adds a refreshing tartness but the vanilla extract is barely noticeable. Overall, it's not a drink I would want to try again.