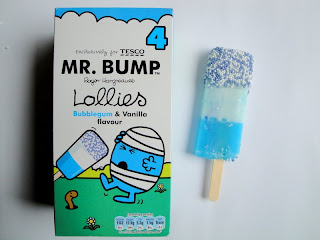 I have always been a great fan of the Mr. Men and Little Miss range of childrens books, they are such a fantastic range of characters, highlighting many of our strengths and weaknesses in such a fun and colourful way. When my children were very little I even asked my creatively talented brother to paint their nursery with all the characters in a vibrant Misterland scene; the result was wonderful.

There have been other releases of Mr. Men themed ice lollies for children over the years but this new range exclusive to Tesco, is my absolute favourite so far. Luckily my children (primary school aged) still love the Mr. Men even though they have long since outgrown their nursery. They were so happy when they saw these lollies and even happier when they got to taste them!

One of the best things about this range is undoubtedly the packaging, it's firmly in the old school Mr Men style with the blue sky, green grass and obligatory worm peering out of his hole! This range is classic retro Mr. Men and I love it.

Firstly we have the Mr. Bump Bubblegum & Vanilla Flavour Ice lollies which were the hands down favourite with my boys. It really is Mr. Bump in ice lolly form, it has his distinctive blue and white colouring and bands of colour which remind me of his bandages. The white part is described at the back of the package as 'white chocolate' and is covered in blue and white sprinkles. It is thinly layered over the blue bubblegum flavoured lolly underneath. The bubblegum flavour is fruity and authentic but not too overpowering.  It's definitely a fun take on the classic kids sprinkle topped lollies such as a Fab, although it does have a lot less sprinkles and vanilla coating than a Fab, but the flavour and Mr Bump branding makes this the number one lolly in my house at the moment! £1 for a pack of 4. 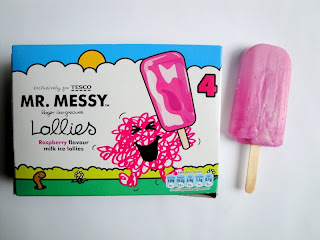 Next we have the Mr. Messy Raspberry flavour milk ice lolly. It's a great choice for the Mr. Messy character with it's bright pink colour and swirls of white making it look, well, messy. These were greatly enjoyed by my boys too, they liked the milky raspberry taste, just like a raspberry milkshake. It does not look exactly the same as the picture in the packaging, the white parts are mostly pale pink in colour but it's still a very fun and different lolly. £1 for a pack of 4. 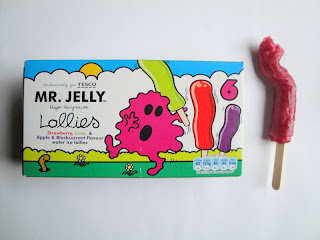 Lastly we have the Mr. Jelly Strawberry, Lime, Apple & Blackcurrant flavour water ice lollies which are the most economical since they contain 6 lollies for £1, two of each flavour. My picture above has turned out a bit strange, the lollies are not actually shaped all twisty like that but they do have a 'wobbly' sort of consistency rather then being a hard ice lolly. I think they have done a great job of capturing the wobbliness of a jelly in an ice lolly. My boys enjoyed shaking the sticks to make the lolly move just as much as they enjoyed the taste, they thought the wobble was amazing! I was expecting the lolly to just break in half or fall off the stick but it was surprisingly sturdy. The flavours were very fruity and since I like lime flavour I had to give one of them a try myself!

These lollies are currently on offer in Tesco at £1 for a pack of 4. I have stocked up my freezer!

You may also be interested in:
Mr Men Yogurt Drinks
Mr Men Chocolate Characters
Posted by Grocery Gems at 14:10